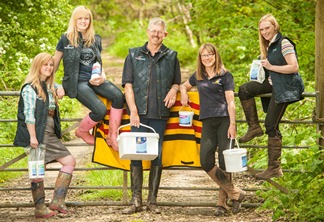 EquiFeast prides itself on being an innovator in the horse supplements and feed industry. Not satisfied to rely on almost completely unfunded equine science the company has invested heavily in its own research projects almost exclusively in conjunction with its customers. In 2014 it won the National FSB/Worldpay Award for Business Innovation primarily for the way it leveraged its close customer relationships into powerful data that informed both product design and customer service.

The biggest firms in the industry are now attempting to follow the EquiFeast lead. A while ago calcium was almost unheard of in horse calmers. Now you will find them in products made by Equine America, NAF and TEN Supplements plus a number of smaller firms. None are able to use EquiFeast’s patented chelated calcium and the research makes it very clear that non-chelated forms of calcium don’t work and may make things worse.

The firm’s pioneering work has also developed a completely new way of looking at magnesium. Again the competitive reaction has moved from hostility to acceptance. TEN Supplements (Mars Horsecare, Spillers, Winergy) recently acknowledged publicly that excess supplementary magnesium is not excreted and does increase levels in the blood. Their latest calmer formulations show both their first use of (the wrong sort of) calcium and reduced magnesium.

EquiFeast’s VCAL chelated calcium technology is now finding applications outside its starting point of behaviour and performance and research is ongoing in the areas of muscles, tendons and ligaments, bones, gut function, sweating, sex hormones and dopamine release.

Beyond chelated calcium and magnesium the firm is pioneering incredibly powerful ways of supporting the immune system. It is the immune system’s job to deal with allergies as well as infections. So EquiFeast is developing an excellent reputation for ensuring that horses maintain excellent skin condition in both muddy conditions and when the flies, midges and pollen are active.

EquiFeast has developed an enviable reputation for supporting its customers.

1999 Started exporting bird products to the USA and Europe.

2001 Second firm to introduce the key ingredients for “White Cell Support” in any UK animal feed/supplement.

All prices are in GBP.