It is our strong belief based on the feedback of a large number of our customers that if a horse's brain function is impaired by inappropriate nutrition or sedatives and they are put into a stressful environment, they become anxious and their behaviour can deteriorate. Horses should be good risk assessors and not run away from a flapping leaf. A properly functioning brain enables the horse to evaluate its world effectively and recognise that butterflies and flower pots are not threatening.

"Brain impairing" horse calmers create Jekyll and Hyde personalities that switch from sedated to dangerous; sometimes in the time it takes to click your fingers. Good horse calmers improve brain function and enable horses to understand their environment!

Sadly, common issues in modern horse diets mean that many are brain impaired due to a lack or an excess of some very simple nutrients. The up side of this is that appropriately adjusting their diets is likely to be very beneficial for both their welfare and their performance.

Without doubt calcium is a very important nutrient for brain function*. In simplistic terms the inside of a resting nerve cell is a calcium free zone. The animal invests a huge amount of energy in maintaining this. When the cell needs to fire, a pulse of calcium ions is pumped into the cell to' switch it on.  Elegantly this calcium switches on many cell functions |(like neirotransmission) but also it activates the pumps that shift it back out again.

Despite billions of dollars being spent on "calcium signalling research" and "ion transport in cells" scientists haven't yet turned their attention to chelated minerals at this cellular and molecular level. But our field trials lead us to the hypothesis that calcium in chelated form has an important role in this process. We have a hunch that this role involves things inside cells called VDACs and more than that we think it may involve removing the calcium ions from the cell cytoplasm and returning the cell to the resting state. In truth the molecular mechanism is unexplained. But if we are right it would explain why chelated calcium would improve brain function, because it helps maintain the animal's nerve cells ready to fire when needed. 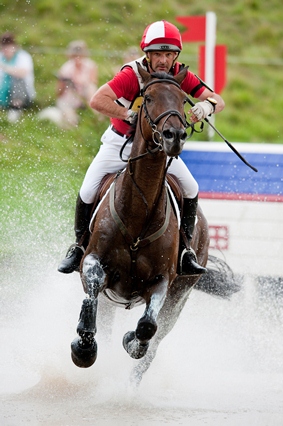 Magnesium - the good and the bad

Compared to the incredible control processes in place for calcium, magnesium is very difficult to manage within the body. According to EquiFeast's trials, if you feed a lot of magnesium, the blood magnesium levels will rise, feed too little and they drop. But while our trials only point to this conclusion we have recently found research that confirmed that in horse way back in 1972 and 1973. This work (by Hintz and Schryver) is still referred to in the latest edition of "nutrient Requirements of Horses" published by America's National Research Council which is the book that most would regard as the equine nutritionist's bible.

Read this very easy-to-read scientific summary of magnesium in horses with the key points colour highlighted by me:

Magnesium has over 300 jobs in the body but the most important for nerve and brain function, is the provision of energy in the form used at a cellular level. Insufficient magnesium leads to insufficient energy and poor brain function. Poor brain function leads to difficult behaviour as the animal is unable to evaluate its surroundings properly.

Horses suffering from a magnesium deficiency will therefore be 'calmed' by a dietary increase of both magnesium and chelated calcium, as that leads to improved brain function.

Many feed firms and academics have argued that all you need to do is reduce starch and increase fibre and horses would be well behaved. Often they argued that magnesium was totally unproven as a calmer so should be avoided. Yet these days many feed companies add large amounts of magnesium to their feeds or use ingredients with naturally high magnesium levels!

In our experience, based on both customer feedback and field trials) this approach to 'calming' can have a negative effect on behaviour. This is because excess magnesium blocks the calcium receptors in nerve cells, impairing normal function. This is known as magnesium being a calcium antagonist and some supplements companies refer to this property of magnesium in their literature. If you study the neuroscience, biochemistry and anaesthesiology you will also find that large quantities of magnesium block NMDA channels and that makes it hard for some nerve cells to communicate with each other. So the science is really clear what magnesium does and how it does it. As is the FEI that lists injectable magnesium as a controlled substance because of its sedative characteristics.

Is there evidence for magnesium sedating horses at oral doses? The answer is a clear yes. A PhD student in Australia, Jess Dodd, achieved comparable effects to a dose of Acepromazine (ACE, Sedalin, ACP) with 2.5 grams and 10 grams of magnesium from Magnesium Aspartate. This work was presented at the Equine Science Society Symposium in 2015 and published in the Journal of Equine Veterinary Science as an abstract. You can read more about this work here:
https://equifeast-shop.com/horse-calming-and-sedation/

So if oral magnesium at such low levels can be easily compared to a veterinary sedative that leaves another one of EquiFeast's theories to be considered. We believe that when a horse's brain is impaired by magnesium or any other sedative the horse's ability to assess risk is impaired. Jess Dodd's work looked quite specifically at the reactive, unthinking "fear response". But anxiety involves far more complex processes in different parts of the brain. Dr Andrew McLean in Australia has spent over thirty years studying the horse's brain and tells us (private verbal communication) that he isn't sure which part of the brain is involved. So again the science doesn't help much. But we believe that because all the nerve cells in the brain use the same calcium signalling if the fear response in the Amygdala is impaired it makes sense that the rest of the brain will suffer too.

So the EquiFeast working hypothesis is that horses with impaired brain function will not only sedated but that they will struggle to asses risk. If they can't tell the difference between a butterfly and a lion they will at best get anxious or struggle to concentrate on work and at worst become spooky and possibly explosive. This Jekyll and Hyde behaviour is commonly reported to EquiFeast by customers - sometimes when they have made very small diet changes that have increased magnesium.

That page also has a link to

This can lead to horses which are sedated in a relaxed environment but explosive under stress.

Equifeast's trials suggest that the provision of chelated calcium not only improves brain function in its own right but also helps the horse to control its blood magnesium level (up or down as necessary). But this effect is limited if nutritional intake of magnesium is too high.

A number of competition horses are being fed balancers or concentrates with plenty or even excessive levels of magnesium, so adding pure magnesium supplements can only lead to the Jekyll and Hyde behaviour. Recreational horses may be getting too much or too little magnesium so ring the EquiFeast advice line to discuss this with an experienced consultant.

Prey animals like horses and antelope must be good riskassessors, not flightly. 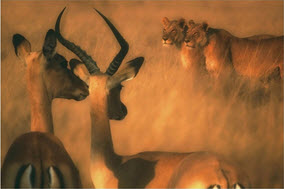 The argument goes that whenever the horse sees something it doesn't understand, it should flee first and ask questions later. Horses whose brains are not working properly often do exactly that.

Actually this approach makes sense for prey animals that are always close to some sort of cover, so a garden or woodland bird can quickly find security in a hedge or a tree. However, horses evolved on the open plains of the Asian Steppes.  There is no cover to run to in that environment, so a horse that spooked at a flapping leaf would have been far more likely to run into the jaws of a Sabre-Tooth Tiger than away from it.

Prey animals in open country need to be good risk assessors. Horses should be like the antelope in the picture, not running away­ even from a predator, if it is not in hunting mode. Their brain should be assessing whether the lion (or scary object) is actually likely to attack them or not and react accordingly.

Once your horse's brain is working optimally, it will quickly work out that there is no need to shy at the flower pot or rush to the exit.  It's all about good brain function.

So our job is to help you get the chelated calcium and magnesium right for your horse.

* Calcium contributes to normal muscle function and neurotransmission as well as the normal function of digestive enzymes*. This is an approved health claim on the EU Register on nutrition and health claims p6 of 835.