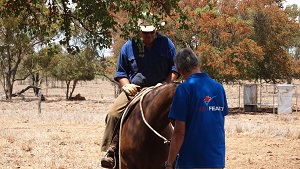 EquiFeast is delighted to work with its customers on research projects.
Here with Greg Peck a 15 hour drive north west of Brisbane in Central Queensland in 2013.

EquiFeast prides itself on being an innovator in the horse supplements and feed industry. While most feed and supplements firms rely on the tiny amount of science produced by academic Equine Scientists EquiFeast has invested heavily in its own research projects almost exclusively in conjunction with its customers. In 2014 it won the National FSB/Worldpay Award for Business Innovation primarily for the way it leveraged its close customer relationships into powerful data that informed both product design and customer service.

Of course the downside is that EquiFeast is ahead of academia in its main specialities (chelated calcium, magnesium and immunity) leaving it open to criticism that its technologies are not "scientifically proven". However some of the biggest firms in the industry are now attempting to piggyback on EquiFeast's research. Sadly by not implementing the technology correctly. A while ago calcium was almost unheard of in horse calmers. Now you will find them in products made by Equine America, NAF and, while they existed, TEN Supplements plus a number of smaller firms. None are able to use EquiFeast’s patented chelated calcium and the research makes it very clear that non-chelated forms of calcium don’t work and may make things worse.

This problem has been even worse in Australia where a number of firms have misleading claimed to use chelated calcium when in reality they have none or only tiny amounts. Reluctantly EquiFeast was forced to report Jenquine to Ad Standards to bring their promotional material more into line with their formulations.

The firm’s pioneering work has also developed a completely new way of looking at magnesium. Again the competitive reaction has moved from hostility to acceptance. TEN Supplements (Mars Horsecare, Spillers, Winergy) recently acknowledged publicly that excess supplementary magnesium is not excreted and does increase levels in the blood. Their latest calmer formulations show both their first use of (the wrong sort of) calcium and reduced magnesium. Sadly TEN Supplements didn't survive.

EquiFeast's magnesium journey has been interesting. Initial blood tests showed that what were regarded as perfectly normal diets were able to produce elevated blood magnesium levels. This was in complete contrast to the prevailing "wisdom" of the industry that claimed that excess magnesium was simply excreted. The firm's results were actually pre-dated by Hintz & Schryver's work by 38 years - but the feed and supplements industries have both ignored this work!

Over the years EquiFeast has worked really closely with customers (over 30,000 horses have been monitored through their "fine tuning" process) and they have moved their understanding from thinking that, while the feed firms used too much magnesium a small amount was probably a good idea to their current position that there is no justification or benefit to adding artificial magnesium to feeds or supplements except in a very tiny number of horses in quite limited, extreme situations. The most fundamental characteristic of a scientist is that he/she must be prepared to admit he is wrong. Changing products and advice as the research dictates is a characteristic of EquiFeast that the firm is very proud of.

EquiFeast’s chelated calcium technology is now finding applications outside its starting point of behaviour and performance and research is ongoing in the areas of muscles, tendons and ligaments, bones, gut function, sweating, sex hormones and dopamine release.

Beyond chelated calcium and magnesium the firm is pioneering incredibly powerful ways of supporting the immune system. It is the immune system’s job to deal with allergies as well as infections. So EquiFeast is developing an excellent reputation for ensuring that horses maintain excellent skin condition in both muddy conditions and when the flies, midges and pollen are active.

EquiFeast has tried very hard to involve academic scientists but there are a whole pile of obstacles to that. Read more about that here.

The "Tell me about" section of this web site and the company's YouTube channel provide a number of resources about various research projects.

1999 Started exporting bird products to the USA and Europe.

2001 Second firm to introduce the key ingredients for “White Cell Support” in any UK animal feed/supplement.

First Australian blood trials on horses and first EquiFeast products made and sold in Australia. This work has completely changed our understanding of "Big Head" in oxalate affected horses.

2016 - 2020 Collected dietary magnesium data from nearly 30,000 horses that were being introduced to chelated calcium supplements. Determined that some horses reacted negatively to even tiny amounts of magnesium (0.1 grams a day). Recognising that they needed to be even more positive about reducing artificial sources of magnesium in whole diets EquiFeast encouraged all new customers (and as many existing ones as possible) to avoid artificial magnesium. Now 97% of new horses to the CORE&MORE range seem to do best with no added magnesium in their whole diet.