In 2013 Thomas C. Südhof of Stanford University was awarded the Nobel Prize for his contribution to identifying the role of calcium in switching cells off and on and transporting chemicals inside and between cells. Though starting in neuroscience we now know that calcium signalling is occurring in almost every cell in animals’ bodies. So when it goes wrong the effects are seen all over the place. And that is what we see with oxalate affected horses.

So here is a grossly oversimplified explanation of calcium signalling using a nerve cell as an example.

In this diagram the inside of the cell is a virtually calcium free zone. In fact we expend a huge amount of energy constantly pumping calcium out of our cells. When we need to create a nerve impulse a little burst of calcium is pumped in and that flicks the “switches” that create the nerve impulse. 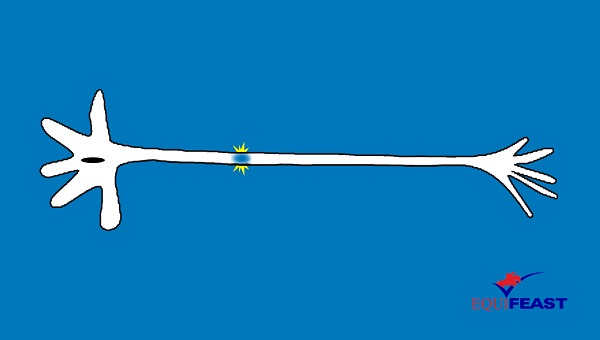 One of the really elegant things about this system is that some of the calcium receptors (switches) are on the pumps that pump the calcium back out again. This way calcium signalling is involved in both switching the cell on and switching it off again. A few of you will have read that magnesium has a role in this. I am afraid that the modern understanding of calcium signalling shows that hypothesis from the 1970s was and still is wrong.

Symptoms of failures in calcium signalling occur even when blood tests show that the blood and fluids that surround the cells still contain plenty of calcium. In other words the horse shows loads of non-bone symptoms even when there is still plenty of calcium surrounding the cells. And the evidence suggests that, not surprisingly, adding more calcium to the diet does not have any effect on these horses. I will return to this issue.

This use of calcium to switch things on occurs all over the cell. Here is a list of the major effects that calcium signalling has:

To a greater or lesser extent all these issues are faced by horses grazing oxalate pastures.

Scientists have been studying calcium signalling for about 20 years. We still have a lot to learn. But one aspect I haven’t mentioned yet is the fact that there are actually stores of calcium inside the cell too. These stores enable calcium signalling to operate all over the place. And these stores are serviced by some big channels called VDACs that have some remarkable characteristics. Most notably their ability to select and transport chelated calcium molecules. Two other aspects of VDACs that are very interesting are their close association with calcium storage in the cells and the fact that they are one of the most common proteins in our body. So it is surprising that the amount of research on VDACs is miniscule.

We believe (perhaps hope would be a better word) that VDACs will unlock the key to what chelated calcium does within the cells. Just throw money and we can fund the research!