Is there a Missing Link to Hoof Support?

There are few things more important to a horse than its feet ‘no hoof no horse’ as the saying goes. So you would think that the nutrients required to maintain healthy feet would be at the top of the priority list for all feed firms. Yet although it is improving, it certainly isn’t always the case.

There was a time when Biotin was promoted as the only important thing for good hooves. In fact, it is an illustration of the limited amount of science in equine nutrition. For a long time it was probably the only nutrient with some scientific support and as a result was promoted heavily, even though the research was probably quite questionable. It may well help some horses and to leave it out of any broad spectrum supplement would perhaps be risky (certainly one with hooves or feet mentioned on the label!).

However, in the past we have sorted out feet that have already been on high biotin diets. We have also seen success when we have lowered the biotin in the diet by a considerable about. One thing we’re fairly sure of is that any Biotin research that was carried out, was done with diets that had no added methionine in them.

Amino acids are the building blocks from which all proteins are made. Methionine is an Essential Amino Acid, which simply means that animals like horses and humans can’t make it themselves – we have to eat it. Unfortunately for us animals, plant based proteins almost all contain a lot less methionine than we need. When we look at hair and hooves (made of keratin) the methionine content is much greater still. Hence why methionine is also known as a Limiting Amino Acid, because it is so commonly deficient – especially in the diets of herbivores like horses.

We feel this is easily the most important nutrient to feed for any hoof (or moulting) supplement. 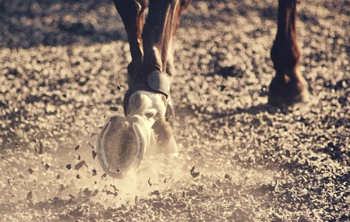 Methionine is an amino acid that contains sulphur. If you think there is a shortage of research on most minerals, look at Sulphur. The NRC’s section on sulphur covers just over half a page and has just two independent references for 1981 and one from 1987. That is not a lot of science!

However the consensus is that horses get most of the sulphur they need by breaking down methionine (already in short supply), so the modern trend to supplement with the organic sulphur source MSM probably has the dual benefits of providing sulphur and conserving precious methionine.

All sorts of minerals are involved in hoof horn production. The only reason to pick out zinc and copper is that they are quite commonly lacking in horse diets – especially those living on sandy soils. And a lack of either of these can certainly impact on the quality of the hoof.

All nutrition is only as good as its weakest link. Our experience is that even with all the above nutrients well covered, some horses still have bad feet! When customers started reporting that a ‘by product’ of their horses’ using our chelated calcium calmer (Cool, Calm & Collected) appeared to be better hoof quality, we were very intrigued!

Our best explanation for this, is that the release of the keratin that makes the hoof is controlled by a system inside the cells called calcium signalling and chelated calcium appears to have a role in this process.

All the things we see chelated calcium do (all over the body) would be explained if chelated calcium had a pivotal role in calcium signalling. We certainly have some ideas how that might be happening, but ultimately this sort of fundamental scientific research costs millions of pounds to carry out! So we will remain in that dark about the exact biochemistry involved. 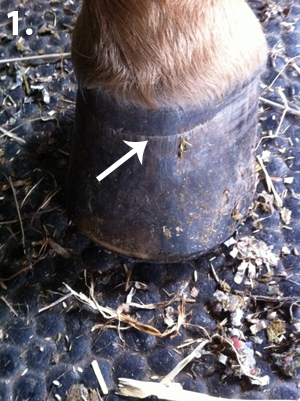 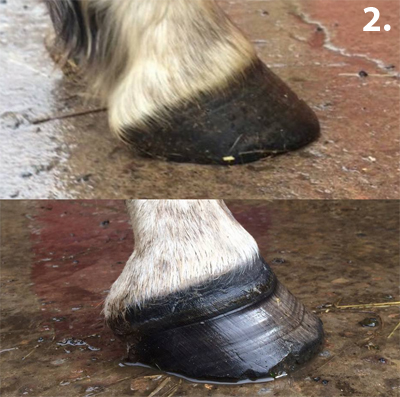 1. A visible line in the hoof growth after the customer switch from a high magnesium balancer, onto CoolCORE which has no added magnesium and contains chelated calcium (Cool, Calm & Collected).

Have a horse with poor feet and have tried all the usual supplements with little success?

Talk to the experienced team at EquiFeast and try a new approach, the one that includes the missing link...

All prices are in GBP.